Hi, today I am happy to announce PLSQLTester that is version of TSQLTester that works on Oracle database instead of Microsoft SQL Server. It works basically the same. and below you can find how it looks. It depends only on ODP.NET provider so, assembly Oracle.DataAccess need to be installed to build this solution. And it works the same way like TSQLTester there are following parameters: connectionStringFile, testCodeSqlFile, newCodeSqlFile, oldCodeSqlFile and preCodeSqlFile, postCodeSqlFile. And last two are not obligatory. PLSQLTester runs test code twice just after invoking new code and second time just after invoking old code. And at the end tool measure how fast was invocation of 2 tests and is test produces the same output, because that is compared. If it is the same output test pass and we have as benefit measurement of execution time. 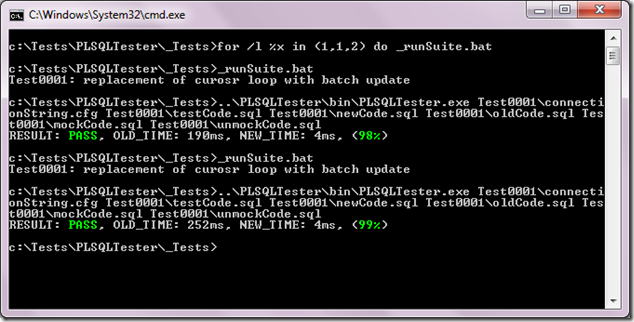 You can download source code with one example on 12c here PLSQLTester (3067 downloads). Enjoy!